BDD is a preoccupation with perceived defects in your appearance. It can begin in childhood and worsen in adolescence and adulthood. Patients think that they are unattractive or disfigured.

BDD obsessions cause excessive distress. Patients may spend extensive time or energy on their appearance. They can obsess on improvements and check features. Thoughts may increase in intensity with little warning. They also may shift from one area to another.

BDD may interfere with school, career, or social life. Some severe BDD patients may quit their job or stay at home to avoid others.

Men and women are at equal risk of developing BDD. Many clients receiving anxiety or depression treatment have BDD. 6-15% of cosmetic surgery or dermatology patients have BDD. 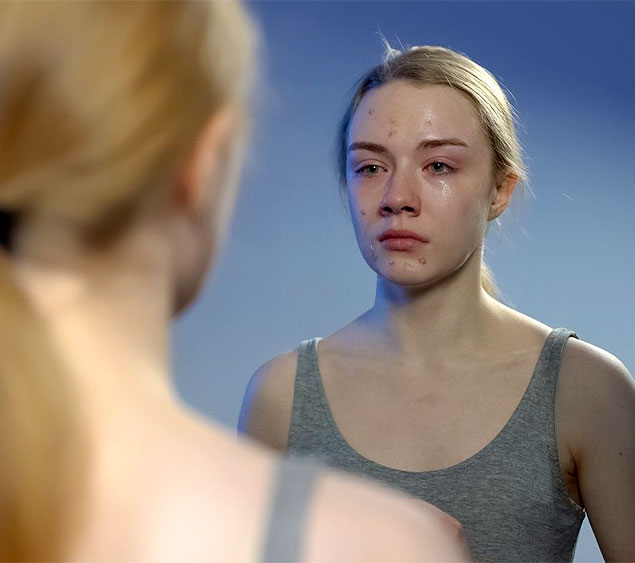 Common obsessions about appearance include:
Skin
Shape or size
Hair
Common repetitive behaviors include:
Please contact our support staff to schedule a consultation at
(212) 308-2440
or intake@cognitivetherapynyc.com

Many CBT components can be helpful. One skill is to challenge beliefs. All of us have inaccurate thoughts. These thoughts can be about ourselves, others, or the world. We might be certain of someone else’s thoughts about us (Mind reading).  We think that this means we look strange to other people. Or we might think people are only stunning or ugly (All or nothing thinking). We can learn to recognize these beliefs, categorize them, examine the evidence, and change our beliefs. When we change our beliefs to be more realistic we often find that our concern about our appearance becomes less judgmental.

Part of therapy is exposing yourself to situations and to elements of our appearance that you feel uncomfortable with. During exposure clients approach situations they find unpleasant. They might go out after spending less time getting ready. Or go to the store even though they think they look bad that day. Over time, these actions can become easier. Exposure helps you learn that you can tolerate distress, that others are not judging you, and that you do not need to hide in shame.

Anne was a college student. She studied economics and had good grades. She was very likeable. Friends often wanted to make plans with her. She recently started seeing someone.

Anne obsessed about her nose. She hated the shape of it. “Hideous” was the most common word. This started as a teenager. She asked her parents to get surgery at age 16. They strongly refused. She continued to feel ashamed about her appearance.

She was often late to high school. She told friends she overslept. In truth she spent hours getting ready on bad days. On some mornings her nose looked less bad. Other days were terrible. It seemed that all she could think about was her appearance.

Applying makeup took the longest. She would start with contouring. Then she would try to feature other areas. Sometimes she finished and it wasn’t right. Then she had to start again.

Then she focused on her hair. She had tried different styles. She preferred some curl to distract. Then she would focus on accessories. Earrings often distracted the best. But the longer she looked in the mirror. The harder it was to feel done.

No one ever mentioned her nose. She assumed they were being nice. She did watch others expressions and eyes closely. She felt sure they were looking at her nose. This could be distracting during conversations.

Now in college, Anne still hoped to get surgery some day. She wanted to have her own finances. But she also worried about getting a job. Would people hire her? She heard that therapy might help in the meantime.

Anne described her habits to the therapist. She explained how often she thought about her nose. She described all the time she spent trying to hide it. She described the shame when catching a bad glimpse of herself in a window.

Her therapist described features of BDD. She explained that others have had similar experiences. She might be able to think about her nose in a different way.

Anne learned to identify incorrect beliefs. Her mind told her people were judging. She examined this belief. She considered alternatives. Maybe her friend’s expression wasn’t about her. In fact, she had been worried about her internship. She realized that she had become overly focused on tiny details that others would not notice. She realized that she didn’t give herself credit for many of the positive things about her—including her appearance—but also including her personality and her intelligence. She realized that she was seeing things out of proportion to what they really were. Her therapist helped her understand that she was far more judgmental and perfectionistic about herself than she was of other people.

Anne learned to do “exposures”. She started to go out for errands on days she “felt ugly.” Then she saw friends on those same days. Over time, she was able to go out with less make up.

She also started to use the mirror differently. She look at it less often. She spent less time when she did look.

Anne also recognized when she was lost in thoughts about her nose. She realized how unhelpful this was. She didn’t have to spend hours thinking about it. Even if her nose wasn’t perfect.

“we are providing the highest quality
cognitive-behavioral treatment”